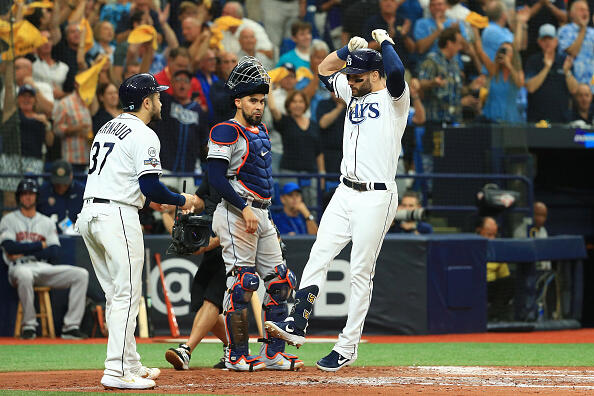 Kevin Kiermaier celebrates with Travis d'Arnaud after hitting a three-run home run against the Houston Astros during the second inning in Game Three of the American League Division Series at Tropicana Field. (Photo by Mike Ehrmann/Getty Images)

ST. PETERSBURG (WDAE) -- After not scoring a single run against either Justin Verlander or Gerrit Cole in the first two games of the American League Division Series, the Tampa Bay Rays bats broke out Monday, hitting four home runs, including three off Astros starter Zack Greinke, and avoiding elimination in their best-of-five series with a 10-3 win over the Houston Astros at Tropicana Field.

In front of the largest crowd this year, over 32,000, Houston tried to suck the energy out of the building, as Jose Altuve homered off Rays starter Charlie Morton in the top of the first inning, giving the Astros an early 1-0 lead. Morton would need 31 pitches to get the first three outs of the game, and was at 52 pitches through two.

Greinke worked a relatively quiet first inning, but saw Tampa Bay jump all over him in the second. Avisail Garcia got the team's first hit, a single, with one out in the inning, and Travis d'Arnaud was hit by a pitch, setting up Kevin Kiermaier, who got a changeup up in the zone and sent it into the seats in right-center for his first career postseason home run and the team's first lead of the series.

Ji-Man Choi's solo homer off Greinke in the third extended Tampa Bay's lead to 4-1, and Brandon Lowe's solo blast leading off the fourth pushed the lead to a grand slam.

The Rays would add three more runs in the inning,thanks to Austin Meadows two-run double and an RBI single from Tommy Pham.

Yuli Gurriel's two-run single cut the lead back to 8-3 in the sixth, but Willy Adames homered in the bottom of the inning to make the advantage six runs, and Travis d'Arnaud's sacrifice fly set the score at 10-3.

After needing 52 pitches to get through the first two innings, Morton finished at 93 pitches through five innings to earn the win.

The win ensures a fourth game in the series, which will take place on Tuesday, as Diego Castillo will open against Justin Verlander, who pitches on short rest.