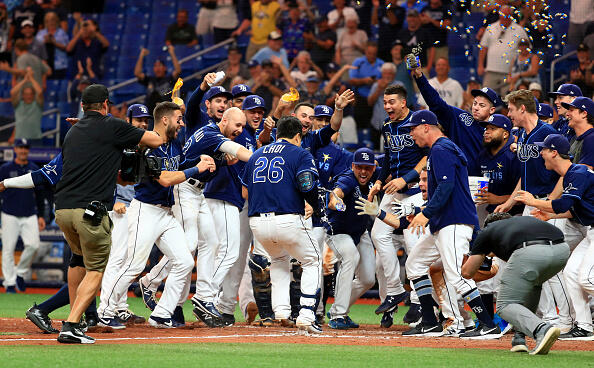 Ji-Man Choi celebrates a walk off home run in the 12th inning against the New York Yankees at Tropicana Field Tuesday. (Photo by Mike Ehrmann/Getty Images)

ST. PETERSBURG (WDAE) -- The Tampa Bay Rays continued to put the pressure on the other two teams vying for a wild card berth in the American League, as Ji-Man Choi's solo home run in the bottom of the 12th inning broke a 1-1 tie and gave the Rays a 2-1 win over the New York Yankees Tuesday at Tropicana Field.

"During the game I could see the ball well, but I wasn’t able to physically hit the ball well," Choi said through translator Ha Ram (Sam) Jeong. "Before the at-bat I was thinking to myself why I couldn’t hit well so I was just waiting for the ball and I was able to hit the ball out of the park."

Despite hitting under .250 for the month, Choi now has five home runs in the final month of the regular season, and has now homered in consecutive games at times manager Kevin cash has needed him to come through the most.

"We needed it," Cash admitted after the game. "Our pitching has been running on fumes. Those guys stepped up so big today. It was really, really impressive. [Ji-Man] comes up, not a lot of offense going on either team. Their bullpen is just lights out. Our bullpen, lights out. Three homers was the deciding of the ballgame and Ji-Man’s was the biggest."

Yonny Chirinos allowed just one hit in three innings of work in his first start since coming off the injured list late last week. Unfortunately for him, it was a third inning solo home run by Cameron Maybin that gave New York a 1-0 lead. Still, Cash was very pleased with what he saw from his right-hander.

"I thought he was outstanding," the Rays skipper said. "Our plan was to give two innings and that was it, but he was so efficient that we felt comfortable going a third [inning]. A big step in the right direction that he got through that. We will see what we get the next time when he is going to pitch."

Rays hitters could not take advantage of a first-inning opportunity to get on the board against starter Jordan Montgomery, and had to wait until Montgomery, Ben Heller, and CC Sabathia, working out of the bullpen in the regular season for the first time after 560 career starts, had finished their nights before tying the game. Kevin Kiermaier with a one-out blast off Stephen Tarpley, which snapped a 1 for 28 skid.

Meanwhile, the Rays bullpen would not allow a run in the nine inning it pitched Tuesday. Chirinos was followed by eight others, beginning with Andrew Kittredge for a scoreless fourth. Left-hander Brendan McKay worked the fifth and two outs into the sixth, with Diego Castillo getting the final out of that inning and all three in the seventh. Emilio Pagan and Colin Poche put up zeroes in the eighth and ninth innings, respectively. Oliver Drake got the first two outs of the tenth, while Chaz Roe finished that inning as well as the eleventh. Pete Fairbanks worked around a two-out bloop double by pinch-hitter Mike Ford by striking out Brett Gardner to finish the top of the 12th and earn his second win of 2019.

With Cleveland defeating the Chicago White Sox at home and Oakland losing on the road to the Los Angeles Angels, All three teams are now separated by a total of one game, with Oakland (94-63) holding the top wild card over Tampa Bay (94-64), who remain one half-game ahead of the Indians (93-64).