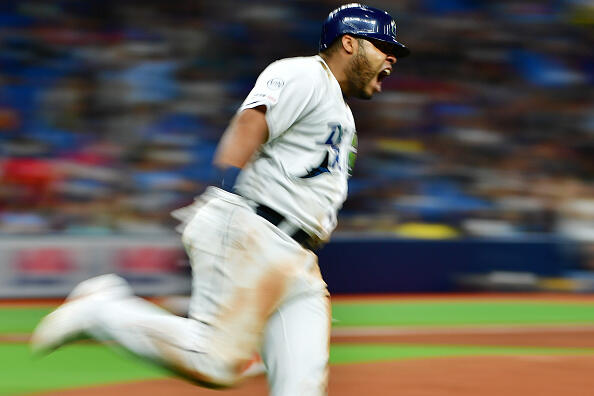 Jesus Aguilar runs the bases after hitting a three-run home run off of Adam Cimber of the Cleveland Indians during the seventh inning Friday at Tropicana Field. (Photo by Julio Aguilar/Getty Images)

ST. PETERSBURG (WDAE) -- Austin Pruitt and a trio of relievers combined to throw a five-hit shutout and Jesus Aguilar's three-run homer helped power the Tampa Bay Rays to a 4-0 whitewashing of the Cleveland Indians Friday at Tropicana Field.

After allowing seven runs or more in each of the previous five contests, Tampa Bay got back into what has brought them success this season, as Austin Pruitt, making his first start of 2019, allowed just four hits without walking a batter and striking out six while pitching into the sixth inning. However, Shane Bieber kept pace with the Rays righty, facing the minimum through four innings, and allowing just three hits total through the first six innings of play.

But it would be the seventh when Tampa Bay would finally break through, as Austin Meadows began by singling to right. Travis d'Arnaud's base hit to center would allow Meadows to take third, and after Ji-Man Choi struck out, Avisail Garcia followed with a base hit that finally ended the stalemate and also brought an end to Bieber's evening.

Terry Francona then turned to Adam Cimber to try and get out of the inning, but Aguilar greeted him by taking a slider that hung up in the strike zone out to left field for his second home run as a member of the Rays and tenth of the year to extend the lead to 4-0.

Oliver Drake, who got the final two outs of the sixth and then worked a scoreless seventh, picked up his third win of the year. Colin Poche bounced back from a five-walk outing Thursday to face the minimum in the eighth Friday, and Andrew Kittredge finished the game with a perfect ninth.

Tampa Bay pulls to within a game and a half of Cleveland for the top Wild Card in the American League, though they remain a game behind Oakland for the second Wild Card. The Rays can secure a series win with a victory in Saturday's middle game.